QT Creator Didn't Work for Me

The first thing I tried was installing QT Creator using Linux Mint's Software Manager. After installing it, I took it for a spin and it didn't work. When I tried to create a test project, it asked me to select a kit. And there is no Kit. There is a configuration that was not done in the QT Creator that is preventing QT Creator find the QT5 libraries.

Another steps before I tried the sample project is to setup the build environment via command line:

This command sets up the basic environment for building console applications using C/C++.

Next, I needed CMake for the command line build.

The command that sets up the QT5 development libraries:

Even that I install the two, I was not able to get QT Creator to work. I tried to find the answers online, but gave up when I couldn't. So I decided that I will get this to work with a simple IDE, and make files.

I need Java so that I can run Eclipse. I have already installed it. By searching the web I would find Eclipse for C/C++. I am already using Eclipse for Java development and for C++, I would use the same. I get the the one compressed file with everything in it. Once I have it, I uncompress it and set the Java runtime to the Eclipse IDE. With this and the two development libraries, I am all set.

But this is not the end of this post. Next, I will discuss how I got my first simple application to work.

I used Eclipse to create the first sample application. I chose New C/C++ Project, then CMake Project. Enter the project name, and it is all set. The sample project would be a simple Hello World (did you notice you cannot spell hello without the word Hell?) console application.

To compile and create the executable binary. I have to do the following three commands:

If I have setup the build environment correctly, I can see the executable "testqt". And I can run it locally, with the following command:

The console will display "Hello World". The next step is to turn this application into a GUI application using QT5.

This is the hardest part. I have to change the file CMakeLists.txt to build QT5 GUI application. Luckily, there were resources available online. First I need to change my CPP file to create GUI windows and run. Here it is:

I found about code from a wonderful site called the "zetcode.com". It provided this simple source code that can popup a window when executable runs. The CMakeLists.txt is a bit trickier. And "qt.io" has this page that show me how.

Anyways, here is my CMakeLists.txt file that I finally got it to work:

In the middle of this file, I have to add this to it. Without it, I was not able to compile the the code. The error was: QApplication: No Such File or Directory. Here is what I added:

This adds all the directory for the compiler to search for the header files. There might be some other things to include. But this simple application, this is all needed.

After the successful build, the executable binary will be created in the build directory. It can be run with the following command in terminal:

Here is a screenshot of application: 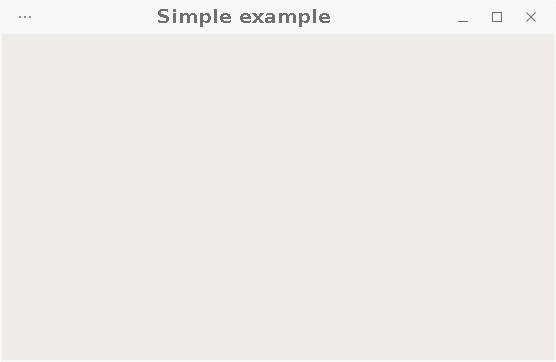 Why do I have to do this? I was going to learn QT5 so that I can work with the source code of CyberOS project. This project is using QT5 and the projects looks so simple. If I can have the key to understand what the codes meant, it could bring my skill set to a whole new level. At minimum, I can learn something new.

This site does not track you by cookies. We only tracking minimum amount of personal information (which you the reader provide voluntarily) in order to prevent outside abuse. And we do not share such info with others, Please click the button below to close this notice. Thank you for visiting.